“Children would be cherished, hope would never perish…” 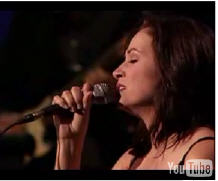 Lisa and I became fans of Frank Wildhorn’s music, after seeing his “Jekyll and Hyde.” His music came to us then, and in the weeks to follow we camped on YouTube, iTunes, and other music sites to discover his music expressed through Linda Eder’s incredible voice.
(Yes, that Linda Eder, of Star Search fame.) “Once Upon a Dream” and “Someone Like You” from Jekyll are incredible, but God lights interesting paths for us to take, and so today guided our path…and yours…to “If I Had My Way.”

Written by Frank Wildhorn, slated for lyrics by Jack Murphy, then credited to Nan Knighton, this song is art following 9/11. A video was posted to YouTube of her first vocal performance of “If I Had My Way” but was later taken down.

Let us not forget those whose lives changed forever on that terrible day in our history, September 11, 2001.

Long ago and far away before the world had come to this
I took for granted how my life would be
Assuming that my freedom would be free
Before these evening shadows fell I reveled in the light of day
I rarely ever cried, my patience wasn’t tried
and heroes never died.

But if I had my way things would be different
danger wouldn’t come from a sky of blue.
Choices would be clear and strangers would be kinder
Love a little blinder as it saved the day
If I had my way.

Every now and then it seems we live our lives to such extremes,
racing all around, never homeward bound
losing what we’ve found.
But if I had my way things would be different
No one would believe that a lie was true
Choices would be clear
and wisdom would be heeded, warnings never needed
This is what I’d pray if I had my way.

The milk of human kindness
Would seek us out and find us
and color all the words we say.

And hearts would come alive instead of breaking
No one would believe that a lie was true
Angels would appear,
Children would be cherished, hope would never perish
Faith would not betray. If I had my way…

You can find her music at “Officially Linda Eder,” on Amazon.com, on wikipedia.org/wiki/Linda_Eder, and the direct link if you have iTunes.